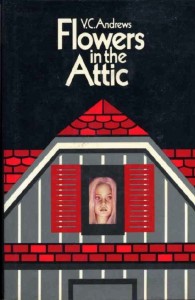 When V.C. Andrews’ Flowers In The Attic was published in 1979, it became all the rage for a teenage girl to read it — and by ‘the rage’ you can presume not only the inclusion of the outrage of those who prefer to censor for all rather than interact with their children as well as the rebellion of teens who wanted to flaunt their right to inflame. And I was one of them.

I can’t imagine there’s anyone who doesn’t, 30 years later, know the story of the four Dollanganger children locked in an attic. But if you don’t…

A) you can find reviews via the comments and ‘links to this post’ at The V.C. Andrews Movement / Reading Challenge

and 2) you might want to stop reading this post now — because while I’m not going give a classic book review, I will be discussing the reading of this book and my reactions to it, which certainly will contain spoilers.

I don’t recall buying the book (I believe my younger sister, ever much-hipper and popular than I, got it and I feasted on her literary leftovers), but in any case, I definitely recall reading Flowers In The Attic as a teen. (It was the paperback version, so that would have been when I was about 16.) In fact, it was an incredibly vivid book, which left its marks (marks — not scars) on me. It haunted me so that I had planned to name my son Cory, after that ill-fated twin, in some sort of sentimental attempt to wipe away the sins or offer retribution via resurrection. But before I would come to that decision I would have to find redemption for myself and my reading habits.

I was horrified reading Flowers In The Attic. I’d read Gothic novels before; I’d read so-called smut before. But nothing disturbed me like this V.C. Andrews novel had — and the rumors that it was based in truth did not help my ambiguity at all.

I was repelled by what I was reading — yet compelled to continue reading it. I couldn’t put it down and walk away from it… Why was I reading this creepy story about a cruelty and performed on children by family members? Especially as I’d elected to neither watch Sybil nor read the book just a few years before simply because it was too horrifying. How was I now reading this book — and sympathizing with incest and rape?! And, heaven help me, I was itching to get the next book in the series. It was scary and confusing and it made me question my own morality.

I could have gone to my parents with my feelings; they were open and easy to talk with, as I’ve described before. But I figured whatever I was going to have to articulate to them, I ought to be able to articulate to myself — and so figure it out for myself from there. And let’s be honest, there was a significant about of shame which kept me from admitting what I was thinking and feeling to anyone else.

So I endeavored to struggle through it on my own.

Eventually I learned that my fascination was simply that of a reader drawn to a compelling story, into the lives and emotions of characters. The creepy and horrifying things were supposed to be creepy and horrifying — I was supposed to cringe and feel crazed for those characters (and despise others). And if I allowed (or was willing to have) the author manipulate and suspend my disbelief into feeling for these characters to the extent that I sympathized (or even romanticized in the Gothic sense) the matters of sibling sex and rape (if not classic violent rape, that scene certainly raises questions of ability to consent), I was not some lewd damaged being caught up in some literary Stockholm syndrome-esque relationship with the author — the very fact that I was bothered enough to be forced to sort through so many shades of grey (and pure evil) proved that. If I was engrossed enough in the characters to want to cheer them on through darkness to some sort of victory and happiness, I was simply human.

By the time the sequel, Petals on the Wind, was released in paperback, I had no qualms about reading it. I would go on, with a clear conscious, to read the entire series (save for the prequel), but I never did name anyone Cory. I got over it.

Being reminded of this book recently, I wondered if it would still have such a powerful effect on me; so I decided to get a copy and read it again.

I titled this post There Are Flowers In The Attic for two reasons. The first one is that in rereading the book, I was again moved. Yes, it’s lighter fiction than I am used to reading (perhaps not young adult reading per se, but light in literary terms), but the dark subject matter still moves. I did spot continuity errors (in two places, Andrews confuses the two twins with one another, which made for bumpy & annoying rereading), but it’s still a solidly creepy, horrific novel.

The second reason the flowers remain in the attic refers to a parenting opportunity. 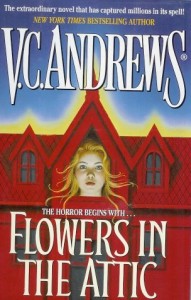 When the 13 year old spotted the ‘scary cover’ of the book, she hinted (she’s forever hinting, not asking) that she’d like to read it. Being that there is a strong sibling effect, I knew the oldest daughter would then want to read what ‘we’ were reading.

Both are pretty strong readers, but the eldest, 20, is an Auspie, so she might have additional confusion reading this book, and the 13 year old has abandonment and other issues resulting from her mentally ill, neglectful biological mother. Suffice it to say, I had concerns how either of them would process the book’s subject matter. So I sat them both down to talk about the book and its content.

I told them that I had no problems with either of them reading the book, but that I wanted them to know that the book was scary — and at was at this point that they interrupted me, laughing about how they watch and enjoy scarier movies than I do. Which is true, but, as I explained to them, Flowers In The Attic was far scarier because it wasn’t about vampires, zombies or other fictional monsters; people did the horrible things.

Mothers and grandmothers abused their own children (the girls’ faces fell) — and as a result, the children themselves did things which would, I supposed based on my own reaction to the book, make the girls uncomfortable.

“What things?” they asked.

“There’s some inappropriate sex,” I replied, not wanting to completely spoil the book for them.

There was a pause; no laughing now.

I told them that the book had made me feel creepy and I was ashamed I continued to read it — so much so, that I was too embarrassed to talk to my parents (their benevolent grandparents) about it. So if they wanted to read it, and they felt uncomfortable, they should feel free to quit reading it, talk to someone about how they felt, or both. (This is a general ‘rule’ we teach the kids; but I felt the need to be specific about it with this book.)

The girls looked at each other and then at me, sitting there with my eyebrows arched into question marks. The 13 year old passed on reading it (I suspect it was the ‘sex’ part; she’s quite the prude). The eldest took a look at the book, read the back of it, and said she’d look for more books by the author at the library the next time she was there.

On one hand, I fear I may have not only ruined a potential good read for them but removed their individual opportunity to struggle with their own morality… My intent was not to censor or turn them off of the book.

But on the other hand, I was honest about the book, the subject matter and issues which might arise, and left it to them to decide for themselves what they could handle and/or were interested in reading; and that, in my opinion, is what parents should do.

Even if I denied them the chance to bloom as readers with this specific book, there will be others — there are always others. I hope our continuing discussions about books, and my respect for them as readers, is simply more seed sowing.

FYI, The Complete V.C. Andrews has a contest to win a copy of the newly released Flowers in the Attic/Petals on the Wind bind-up (two books in one) edition to give away.