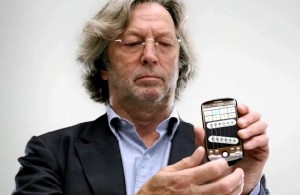 When I saw Eric Clapton hawking the new Fender Limited Edition of T-Mobile’s myTouch 3G I had a thought — well, actually, I had two thoughts. The first one was, “Oh my gawd, when did Clapton get so old?” But that one just sent me on the how-old-am-I? spiral of denial, augmented by defensive tirades and rationalizations regarding ageism. And those serve no purpose, really.

So my real thoughts were about the collectibility of cell phones.

It’s a pet peeve of mine to see things mass produced and mass marketed as “Limited Edition Collectibles.” It’s not only rather meaningless from a numbers point of view, but when it comes to collectibles, there’s gotta be something else besides words printed on a box or spoken by celebrities to drive collectors.

On average, we each discard one cell phone a year. If we are nice, we donate our used ones to shelters, but most of us — too many of us — just toss them into the trash like yesterday’s newspaper, thinking they are just as obsolete. (Yes, the “technology advances,” but let’s not overlook the role of throw-away consumerism plays in the competitive world of selling cell phones and their plans.)

All of this means that cell phones are as ephemeral as newspapers.

Yet newspapers are collectible. So maybe cell phones will be too. Other old phones are… 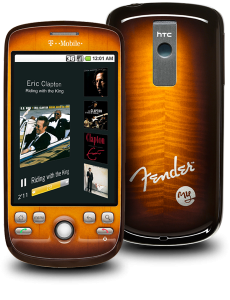 While the Limited Edition Fender myTouch 3G features the beauty of a Fender’s sunburst-finish, I doubt this, or Clapton’s endorsement, will be what might make this phone collectible. What will drive its collectibility is what drives most any other item’s collectibility: nostalgia.

If people are motivated to purchase the Fender myTouch, they’ll need to use it in order to create memories. They’ll need to spy one 20-30 years from now and exclaim, “Oh, I had one of those!” and instantly be transported back to those days…

Because while 20-30 years from now, we’ll be receiving calls like Harry Solomon — “Incoming message from the Big Giant Head!” — and cell phones will be as old fashioned as rotary dials, cords, and asking Sarah to connect us to someone in Mayberry, we’ll want the phones we once had. Not necessarily the ones that looked like pretty wooden iconic guitars.

Though, by that time, guitars of any sort may also be a thing of the past too. So who the hell knows?