I’m completely smitten with these 1916 M.J. Moriarty Playing Cards featuring the leading ladies and gents of the silent silver screen. 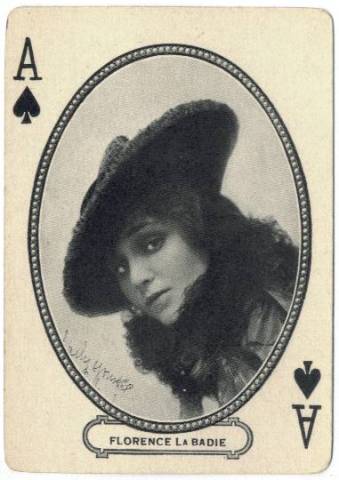 I found them when I found my buddy Cliff Aliperti (who deals in vintage movie collectibles, especially movie cards and other ephemera) in chat and asked him if he had a photo or scan of something featuring Florence LaBadie for a silent film article I was writing. When he sent me two options, I, the too easily smitten, replied, “Damn you, those cards are cool!”

“Which ones? The playing cards or the pink borders?” Cliff types back.

“Both, actually,” I reply. “I like the playing cards a lot — but I’m a girl and pink scrolls are sexy too.”

He sends me links to more — purely to torture me, I am sure. 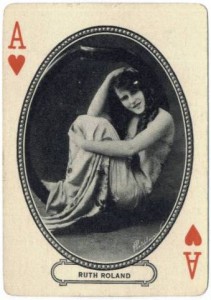 And while I’m looking them over, he tells me more about these old playing cards. “But the fun is there’s different cards in some decks … I’ve seen over 100 different cards. Ruth Roland, on one of the Aces, there are actually 4 different poses for the single card. But some of the variations are totally different stars — like one deck shows Norma and Constance Talmadge together, another has them on 2 separate cards.”

At this point, all I could say was, “Dude, stop messing with my head! It’s not nice to do that to obsessives.”

Like Cliff, you know I am obsessive with stuff; so y’all know I was half begging him to stop, half in love with the idea of hunting down all the variations.

I mean Charlie Chaplin as the Joker? Awesome!

Plus these cards feature silent film stars I’ve never even heard of — oh, the glory of the hours of research!

You can get more details and see all the cards in the gallery at Cliff’s site; and you can buy cards from him in his store, Move Cards For Sale, and in his eBay listings 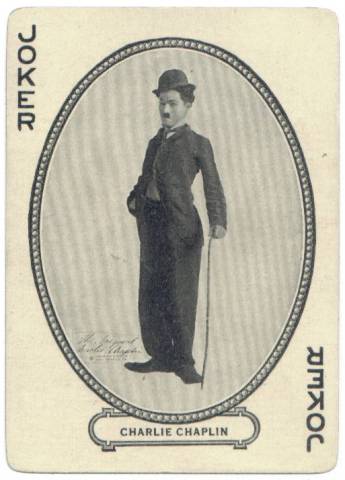