Alessia here, responding to AskMen.com’s Top 10 Scary Girlfriend Behaviors, so that they — and you — can, you know, learn something.

10 She knows things about you that you haven’t told her. Uh, maybe that’s because you men are transparent children and we can see right through you.

9 She introduces herself to your family & friends behind your back. OK, that is wildly inappropriate, if not down-right scary stalker behavior. Girls & boys, don’t do that. However…

This line, “If she gets in good with the ones you trust, it will be much harder to give her the eventual heave-ho,” is stupid. Unless you are a completely dependent or codependent person, any grown-up can and does run their own relationships and break-ups.

8 She responds to messages on your behalf. Unless she was practicing number 9 — or you were, silly boy, by not being a gown-up and avoiding things, this doesn’t really happen.

7 She has all your passwords without you having given them to her. This is like stalker No 9 behavior. Learn boundaries, people.

6 She shows up in places unexpectedly. First of all, don’t tell her where you’ll be if you don’t want her to know — that way, unless she’s a stalker doing number 9 things, it won’t happen. But girls, if a guy didn’t invite you, you’re not welcome. And that doesn’t have to be personal; it’s just some personal time.

5 She made a key to your house without asking. The article continues to say, “How she did it isn’t important right now because you should be much more concerned with why she did it and what you’re going to have to say to get it back.” Well, the freaking “how” is important. Because unless you’re a weak dude who won’t admit you actually gave her the key (or one to copy), the chick is not right in the head. Ditto guys who do this to girls.

4 She stops taking birth control without telling you. There’s so much wrong with this, I have to show it to you:

As crazy as she’s been acting, the sex is still porn-movie material. It makes sense because the crazy ones are always phenomenal in the sack. You ditched the love glove weeks ago because she is on the pill. At least you think she is on the pill. You haven’t see her take it, she hasn’t had to stop at the pharmacy for a refill and, now that you think about it, you can’t recall the last time she had a monthly visit from “Aunt Flo.”

How to handle it: You could just be imagining things, but come right out and ask her if she is still on birth control. Ask to see proof. Make up an excuse, like a friend who just found out his girlfriend is unexpectedly expecting, and it made you realize that you’re in no way ready to be a dad. She’ll want to ease your fears and show that she still pops the pill daily. If she can’t show proof, you’ll need to make a pit stop at the pharmacy for a new stock of rubber raincoats and a home pregnancy test.

Whoa, there’s so much unconditional love and trust going on there, I’m nearly at a loss for words. Nearly.

Dudes, did she ever say she was on the pill or any other birth control? If she did, she’ll tell you if/when she’s going to stop. Likely she’ll tell you why too. But she will tell you before she stops and probably even tell you to go get condoms. Why? Because she knows she’s the one at greatest risk with a pregnancy, so she’ll avoid it.

Unless, of course, all your worst stereotypical male behavior is an indication that you are living in some soap opera or movie… Then yeah, she’s gonna try to trap you into marriage by having you help create a fetus; because we womenfolk know just how well that works out for us.

(That’s dripping with sarcasm; I tell you that because if you’re so dumb as to believe this has a greater likelihood of occurrance than her killing you and your entire family, you probably can’t figure it out.)

3 She gets physical when arguing. Yes, that is scary. (Though the odds of that are far less than the odds of you men hitting a woman.) But you missed the opportunity here, AskMen.com, to suggest how to properly deal with abuse, i.e. get professional help for the both of you &/or stop dating/end contact entirely.

2 She threatens to hurt/kill herself. Yup, that’s scary. Neither guys nor girls should do this. Also see my previous advice about getting professional help, etc.

But then, article author Chris Illuminati (an ironic pen name, I suppose?), you had to go and say this: “The other scary behaviors should have raised enough red flags.”

OMG here I thought we were talking about the Top 10 Scary Things Women Can Do, not building the stalking pyramid of danger of one freak of a girlfriend!

I don’t want to blame a victim, but if this is all the same woman why didn’t you leave earlier? Why, Chris, didn’t you better title and otherwise sell this article as the 10 Steps To Death From A Lover?

1 She won’t let you break up with her. I think that’s a repeat of number two, personally… Or at least one and two should be reversed because only an spineless idiot is more freaked by continued contact than by suicidal (or homicidal) threats.

Yes, you ignore all contact with her; yes, you tell your family & friends do please do the same. And if we are talking about the same chick (or dude) here, you also contact the police so that there is a record of the stalking behavior and perhaps you change your phone number, tell family and friends you’ve done so (possiblly have them do the same).

And really, is this comical photo the one you should really be using here? Really? 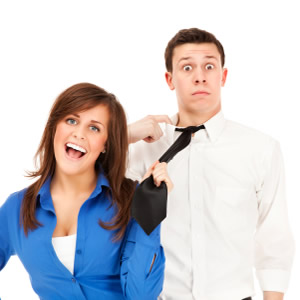