A news clipping from the New Brunswick Times, October 15, 1915, about Miss Ellen Murray who threw an anti-suffrage party:

I can only assume that there was an error and that the dolls and refreshments were in anti-suffrage pink and white, right? And good heavens, why would girls need pencils?! Silly Ellen; only boys need to write!  Plus, buttons are like pins, which is jewelry and more girl-like.  Sheesh. 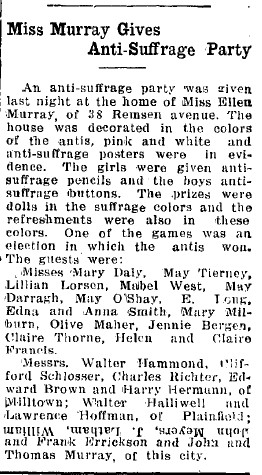