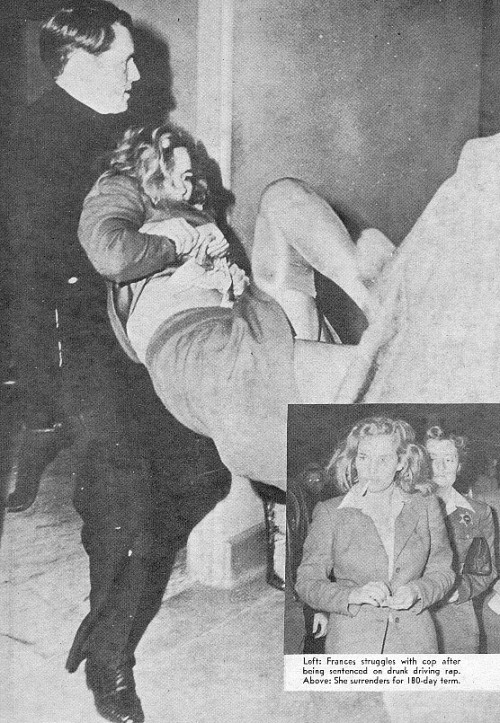 Here’s Kurt Cobain’s response to, “So why was Frances Farmer such an inspiration?” (Melody Maker, August 28th, 1993)

“Well, you know, I’d read some books about her and I found her story interesting. She was a very confrontational person.”

Selfish, maybe. “That’s not what I got from the books I read. Actually, I did from two of the biographies I read about her, but there was one, ‘Shadowland’, the best one, written by this PI from Seattle who researched it for years, and I didn’t get that impression from that one. She was obviously a difficult person, and got more and more difficult as the years went on, as people started to fuck with her more and more.

“I mean, she was institutionalised numerous times and, in the place in Washington where she ended up, the custodians had people lining up all the way through the halls, waiting to rape her. She’d been beaten up and brutally raped for years, every day. She didn’t even have clothes most of the time.

“Courtney especially could relate to Frances Farmer. I made the comparison between the two. When I was reading the book, I realised that this could very well happen to Courtney if things kept going on. There’s only so much a person can take, you know?

“I’ve been told by doctors and psychiatrists that public humiliation is one of the most extreme and hardest things to heal yourself from. It’s as bad as being brutally raped, or witnessing one of your parents murdered in front of your eyes or something like that. It just goes on and on, it grinds into you and it’s so personal.

“And the Frances Farmer thing was a massive conspiracy involving the bourgeois and powerful people in Seattle, especially this one judge who still lives in Seattle to this day. He led this crusade to so humiliate her that she would go insane. In the beginning, she was hospitalised – totally against her will – and she wasn’t even crazy. She got picked up on a drunk driving charge and got committed you know. It was a very scary time to be confrontational.”

Though nothing could excuse what was done to her, even the most reverent accounts of Farmer’s life don’t attempt to deny that she was on extremely difficult person, that her much-vaunted independence often amounted to a ruthless self-interest that left her indifferent to the suffering she caused. So she was no martyr.

But Farmer – beautiful, arrogant, creative, destructive and destroyed –does appear impossibly glamorous, especially from the safe distance of a few decades.

Is that what drew you to her?

The song, especially if Geffen have the good sense to release it as a single, may succeed in glamorising her.

How would you feel about that?

“I’d feel bad about that. I just simply wanted to remind people of tragedies like that. It’s very real and it can happen. People can be driven insane, they can be given lobotomies and be committed and be put in jails for no reason. I mean, from being this glamorous, talented, well-respected movie star, she ended up being given a lobotomy and working in a Four Seasons restaurant.

“And she hated the Hollywood scene, too, and was very vocal about it, so those people were involved in the conspiracy, too. I just wanted to remind people that it happened and it has happened forever.”

Most of your songs are, in one way or another, about suffering. A popular liberal notion is that suffering ennobles. Do you think there’s any truth to that?

“It can, it can. I think a small amount of suffering is healthy. It makes your character stronger.”

Do you think you’ve suffered on a large or small scale?

“What do you think I think?”

“I’ve suffered on a large scale but most of the attacks haven’t been on me, they’ve been on someone I’m totally in love with, my best fucking friend is being completely fucking crucified every two months, if not more. I read a negative article about her every two months.”

Why read it? Why torture yourself?

“A lot of the time I can’t escape it because Courtney gets faxes of articles from the publicist all the time. But also it’s a form of protection. It enables you to remember … and to make sure you never deal with those people again. And another reason we like to read it is that we can learn from the criticism, too. If I never read any of the interviews I did, I’d never be able to say ‘Jeez, that was a pretty stupid thing to say. I’d better try to clear that up.’”

The book Cobain “recommends,” Shadowland, by William Arnold, and the ensuing (no pun intended as Arnold sued regarding the film) Lange movie may not be reliable, according to journalist and researcher Jeffrey Kauffman who has spent decades unraveling the Frances Farmer story. However, this doesn’t change much for me.

It’s not that I refuse to accept fact or Kauffman’s research; quite the contrary.  I find all the representations and misrepresentations as detrimental to Farmer as the life she did lead. Mental health, especially then, was not kind, no matter what the ignorant intention. The media has only become worse. Her life as a creative, passionate woman was painful, co-opted. 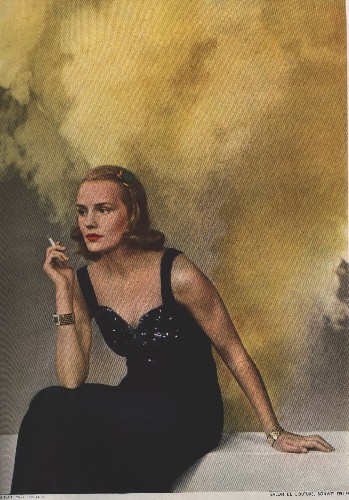