I’m too old to claim to have logged hours of watching She-Ra or He-Man — or any childhood memories from that MOTU period. But that won’t stop me from having an opinion. 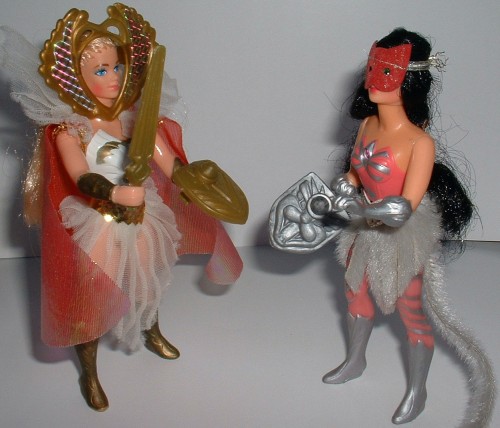 In The Problem With She-Ra as a Feminist Text, Renee Martin considers the retro ass-kicking cartoon vixen in terms of various female identities:

As adult, I can look at She-ra and still appreciate the positive role that she filled for some young girls. I say some, because as a WOC, She-ra is not a show that I would particular encourage my children to watch, and even more so if I had a daughter. You, see when feminists start talking about women’s advancement, my first question is which women are we talking about? If we’re honest, no matter how many times the great unified sisterhood is pitched by feminism, there are always going to be some women, who somehow don’t fit the mold, because they are poor, of colour, trans, lesbian, older, disabled etc.

…I love her even though she is flawed and continues the erasure I feel as a marginalized woman in many spheres, but I will not dismiss her, because I don’t have the right to take away heroes from little White girls, who need their heroes too. Even though their challenges will be much different than mine, I will not deny that these challenges exist, and by so doing erase the threat that they pose to me. There are very few positive role models for young girls of colour to look up to but erasing the few White images will not change that.

When I read Martin’s post, I found myself nodding my head in understanding and agreement; however…

I’m still struck by something Hillary DePiano, author of The She-Ra Collector’s Inventory: An Unofficial Illustrated Guide to All Princess of Power Toys and Accessories, said in my interview with her:

Interestingly enough, I started somewhat backwards. He-Man predated She-Ra by quite a few years and as a kid I just LOVED He-Man. I had quite a few of the toys. But when the spin-off show, She-Ra came out, my parents decided that since there was now a “girl version” that I had to give all my He-Man figures to my brother and that he would play with them and I would get the She-Ra. God, was I bitter about that. I think there is some feminism lesson in there.

I can’t help but wonder, then, if She-Ra was a means of sexual or gender segregation.

She-Ra was part of the Master Of The Universe world but she was relegated to her own corners of it, kept out of the “Males Only” areas just because they had lady parts. (The usual over-emphasized comic book figure lady parts, of course. He-Man had his own exaggerated maleness too; it’s the earmarks of such works.)  I can’t say that watching the complete She-Ra series and all the He-Man episodes, we could count how many water fountains She-Ra and crew couldn’t drink from, how many buses these sheroes rode in the back of; it’s far worse than that.

The simplicity of making an “all female version” of the popular Saturday morning cartoon series completely removes coexistence. Women on one side; men on the other — the original side.  Almost like parallel universes, really. What does that say about gender equality?  Not much. Especially if parents, the kids’ overlords, were interpreting these two shows and their accompanying toy sets as “one for boys, one for girls.”

(If there were any super-cross-over MOTU episodes, those might be more interesting; but I doubt I’d be surprised.)

That’s maybe (partly) why I liked Thundarr The Barbarian

. There may not have been complete equality, but at least Princess Ariel and Ookla the Mok existed along side leading man Thundarr. 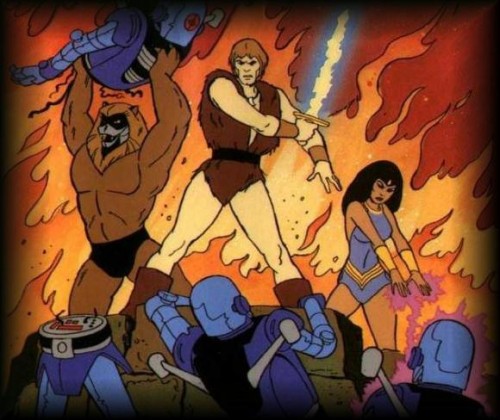 Sadly, there were no Thundarr The Barbarian toys. *heavy sigh* Which means I cannot discuss the parental interaction. Nor can I collect the toys.

PS For the record, I was — and forever remain — an Ookla fan. Ookla was a formerly enslaved a leonine humanoid with fangs and yellow eyes. Whatever a Mok may be in this cultural equation, I guess that’s how I’m identifying.

While Ookla’s guttural, growling language may seem unintelligible, and therefore not appear well suited for writing, “he” is also, according to those who know, “the most likely of the heroes to charge right into an enemy attack or to be enraged by unusual nuisances or threats.” And that, my friends, is how I see myself. (Plus, I will also go quite out of the way to avoid water on my face as well.)