In Wedded Blisters, Neely wonders if marriage is something she even wants to enter into. With the media, as she writes, “depicting marriage as this energy-sapping, miserable way of life, where husbands have to practically beg their wives for sex and wives feel like they’re not being validated enough by their husbands” she’s not enthusiastic:

But what about this daily bombardment of television shows and movies, depicting marriage as the root of all evil? The truth is that these comedies and films play off of real life, and we know this to be the case because we laugh at their humor. We laugh because we recognize truth. People love shows like Everybody Loves Raymond because a depiction of an average guy dealing with the daily struggles of marriage is true to the way it is outside of that rectangular, silver screen. Unmarried couples may not entirely relate to the humor but they understand that this is what they’ll eventually encounter once they walk down the aisle. Are we destined for the same path as Ed and Peggy Bundy, we wonder.

So we turn off our televisions, looking elsewhere for signs of encouragement, only to be bombarded by another reality check on the state of marriage today: the nation’s divorce rate, which towers over us at all times, giving us very good reason to doubt that we will escape the odds.

The media’s reflection of our marital problems may be exaggerated ~ but as Neely points out, it’s funny because it’s true. Marriage is a tricky thing, and certainly our libidos aren’t magically put in sync just because we live together. But if I were to look at our media for answers regarding how we’ve got to this place where Ed and Peggy Bundy are more typical than representative of our greatest fears, I’d say the problem lies with the fantasy of marriage.

From early on we are fed fantasies wherein once love is found they ride off into the sunset. If the story is supposed to be saying “and they lived happily ever after,” they never show it. In film, finding one’s mate is the end of the story when in truth it should be just the beginning.

While we often are entertained by (and feed-off of) the drama of ‘the chase’ and the obstacles faced in the pursuit, we forget that ‘ever after’ is a story complete with dramas of its own. There are obstacles, chases and pursuits to be found in every marriage and I think we should thank our lucky stars for that ~ for each one is a chance to reaffirm our love and dedication. 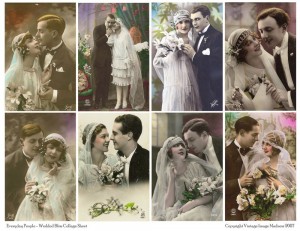 In the romantic movies, our heroes and heroines do not crumple at the first (or even the 10th) problem presented ~ instead they keep their eye on the prize and fight for the chance at true love. Shouldn’t we view and pursue our marriages with the same ardor, passion and dedication?

Work, bills, children, household chores ~ surely none of these is as difficult as the matter of finding, competing for, and securing your mate. (And in truth, now that we are a couple we can attack these problems together; it’s you and me against the world, kid.)

He’s a morning person while she’s most definitely not, he’s stressed out at the job, she’s afraid she’s not as lovely as she once was ~ surely these will yield to the holding of hands, a quiet shared look in a crowded room, a secret slap on the bottom…

We are presented with a myriad of opportunities to sweep our partners off their feet, seduce and charm our ways into their beds, and show that obstacles mean nothing in light of our love.

We need not be complete drama lovers and go overboard creating chaos or imagining things ready to tear the marriage apart, but we can view the problems, difficulties and obstacles with more passion. We can treat each obstacle as the romantic lead does: as a chance to prove our love and win our mate.

And of course, at the end of the day we should be as eager to fall into bed.