When I grabbed this Romper Room Colorpillar toy, I had vague memories of the Romper Room TV show… 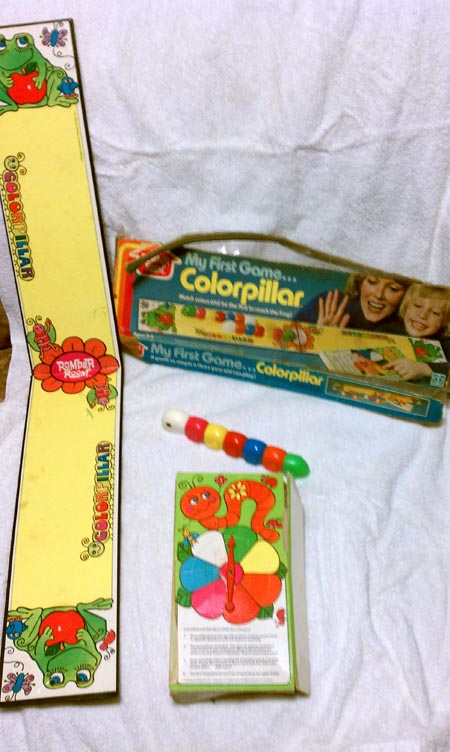 But not enough, apparently. A quick look at the Wiki entry and it turns out this toy is most fitting for this political season.

First, there’s the whole problem with children’s television shows and hosts pitching product during shows. Romper Room was the first target of the newly formed watchdog group Action for Children’s Television who leveraged the power of an threat FCC threat into ceasing “host-selling”.

In 1962, the hostess of the Phoenix franchise of Romper Room linked her own name with that of the ongoing controversies over abortion. Sherri Finkbine, known to television viewers as “Miss Sherri”, sought hospital approval for abortion on the ground that she had been taking thalidomide and believed her child would be born deformed. Finkbine made a public announcement about the dangers of thalidomide, and the hospital refused to allow an abortion, apparently because of her announcement and its own fear of publicity. Finkbine traveled to Sweden for the abortion. Upon completion, it was confirmed that the fetus had no legs and only one arm. The incident became a made-for-TV movie in 1992, A Private Matter, with Sissy Spacek as Finkbine.

I guess this really is an educational toy — if you research it, rather than play with it.

In terms of memories of the show, as I said, they are fuzzy. Not all warm and fuzzy; just not clear. Also according to Wiki:

The hostess would also serve milk and cookies to the children, with prayer offered before eating. The famous Romper Room prayer went “God is great, God is good. Let us thank him for our food. Amen.”

Now that’s the prayer I remember saying. But that’s really odd, because our home was not a praying home. Perhaps this praying business is why I don’t recall much of the show… Perhaps when my folks found out prayer and indoctrination was part of the program, they switched the set off. That is something I will have to ask them.