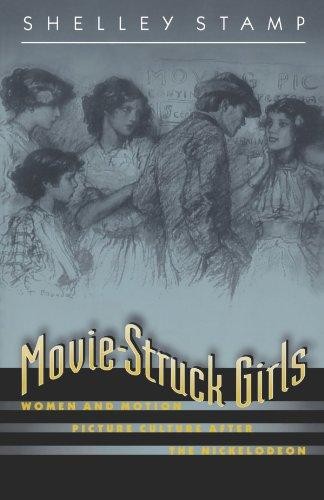 In Movie-Struck Girls: Women & Motion Picture Culture After the Nickelodeon, by Shelley Stamp, we learn more than just the roles of women in films or behind the camera — we learn about women’s role as patrons of cinema.

The book is an eye-opening look at a long ignored part of American film history — and an astonishing look at the history of women as media consumers.

Stamp spent over ten years researching for this book. She studied trade journals, fan magazines, ephemera, and many official documents and records at the National Board of Censorship Archives in New York City, the Academy of Motion Picture Arts and Sciences’ Margaret Herrick Library in Los Angeles, & the New York Public Library for the Performing Arts. Many of the films she reviewed are no longer readily available, let alone circulating, but can be found at the Library of Congress & the UCLA Film and Television Archive.

It sounds like a huge undertaking, & I thank her for it. ‘Movie-Struck Girls’ presents a wealth of information that I had never known before.

Movies began with the nickelodeon, and as such, movies were not places for proper or even improper ladies to be. In the early 1900s, when films were being moved from temporary places with projection onto sheets & walls, and cinemas were being built, many in the business of film, began to reconsider women. This was a purely economic move. For if these new developments, these more expensive buildings, were going to pay for themselves & gain profits to pad pockets, the new movies must include women as patrons & gain their approval.

Why? In ‘Movie-Struck Girls’ the author reminds us of an America where women were seen as the keeper of the family morals. Neither little Johnny Jr. nor Johnny Sr. would be allowed to go to such places if Mother didn’t approve. In order for women to view movies as more than sordid places where her family wouldn’t be caught dead, these new cinemas would need to gain the respect of women. The best way to do that, would be to show women, fine respectable women, how respectable & fine the theaters were. It was thought that if women would give the theaters a try, and continue to come, their physical presence would elevate the standing of film viewing.

So, movie theater owners began to court women as patrons.

They did so via premiums & tie-ins & in addressing the decor of the cinemas themselves. As a marketing person, I enjoyed the conceptions about women, and how they would lure them into the movie-going fold — with many of the tricks still employed in the movie trade today. As a woman, I felt more than a bit bitter to see what they thought…

As Stamp illustrates, cinemas were designed with appeal to women in mind. They were located near shopping and offered services such as package holding with hopes of luring women into the buildings. The buildings themselves were decorated to attract the feminine. It was suggested in industry publications that cinemas ought to have lobbies, with plenty of mirrors, to encourage female patrons — by appealing to their vanity. They thought ‘what woman doesn’t want to see herself & parade for others?’

But then, they complained that women didn’t know how to behave properly: they talked, they interrupted the absorption of the movies themselves. The very women they encourage to be vain, to come to the theater to be seen, these women didn’t want to sit quietly in a dark room full of others who were not paying attention to them. These women who were, by societal standing, to ‘dress’ for these public events, they wore hats that blocked views. And so even while courted by the film industry as valuable assets to ensure the viability of films as safe, moral entertainment for families, the industry mocked them in articles & cartoons. The debate within the industry as to the need for women, how to both cater to while educating them to achieve their purpose, was entering full swing.

But this was only the industry side of the debate; Next, Stamp shows us society’s debates.

In the early 1900’s, the most popular films were vice films, & in the teens, a major societal concern was The White Slave Trade. Sensational white slave films were made during this time, to warn folks of the dangers to their women. Conflicting with the as-billed-educational-films messages, cinemas brought women-folk out into public where they could easily fall prey to such ills as the white slave trade. Debate centered around the irony. Other debate focused on the films themselves, and censorship issues were raised. And to make matters worse, women seemed to enjoy such films! Oh, how could such tender beings watch & enjoy such lewd filth such as scenes from brothels?!

Obviously, women enjoyed the films from the same points of fascination as men, but as the author clearly reminds us, there is more. Adding to the fascination, was the fact that women themselves has seen little of ‘the world’ — even if that ‘world’ was part of their very own city. Through movies, women vicariously saw their nation. This alone would make these films riveting for women.

Again, as movie houses were public gathering places, classes mingled. Not only were there the fine upscale families as so recruited by theater managers, but along with them, the working class — including single women. Single women moved about the theater as patrons, both in danger & dangerous themselves. A woman alone could end up in the slave trade, or she might mingle with gentlemen of good standing… In fact, theaters often hired pretty, single young girls to be ticket sellers, ushers, cigarette girls etc. This was seemingly at odds with the motives of ‘women adding respectability’ and elevating the idea of theater, but it was a lure that worked. But the independent woman, even if only a work-class-girl, is dangerous. Much debate centered around the appropriateness of such places for women & families.

Since the elevation of cinema depended upon the stamp of approval from women, including materials & promotions designed to engage them, the talks about women’s roles in film viewing were discussed by women. Given the general fear of ‘those darn suffragettes,’ encouraging women to debate the social & safety issues of women viewing film — in the context of women viewing educational films about civil matters — seemed a dangerous thing indeed.

The film industry needed to ‘clean up’ the entertainment, so they began to focus on films aimed at women, with stories & formats they knew — Enter the serial film.

The industry coordinated film with print versions of stories in newspaper & print publications. Again, these were often aimed at women, but then came the ‘oh no!’ cry, as women did in fact enjoy the adventure stories. It is at this time that film gave rise to the very popular female star. She was now revered for both her on-screen & off-screen antics. So much so, that young women everywhere started dreaming of being a movie star themselves!

To counter act the scary notion of independent women, adventure serials, & vice films it became routine to mock independent women, with notions of becoming a movie star, or worse, civic ideas. The author clearly shows examples, such as a 1916, The Motion Picture Classic cartoon with the following poem to illustrate this concern:

“When our dear grandmas were girls,
They’d smile and smooth their pretty curls.
Look in the mirror then & say
“Oh, will he think me fair today?”

Today the girlies everywhere,
In the mirror gravely stare;
“Am I fair enough,” they day,
“To be a movie star some day?”

But poetry would not be deemed enough. There would also be many films to lampoon the suffragette.

Mainly these films attempted to show how crazy things would be if women could vote. Movies depicting women taking over government & leaving men’s needs behind darkly illustrating the dangers present to men were made, but more often, comedy was used. Cross-dressing men & women exchanged roles, with only love ‘saving’ the women from their folly. Ironically, it seems to the reader that perhaps these movies did more favor to the opposition than to their own cause.

The suffragist movement noted the power of cinema. If educational films were popular, and women not only allowed but encouraged to attend, why not make propaganda films of their own? Both the National American Woman Suffrage Association (NAWSA) & the Women’s Political Union (WPU) made films to both rally women to the cause & to educate resistant men & women. Sadly, many of their films seemed to falter at romantic notions. In order to make the female stars appealing, less threatening, most often the female lead would succumb to love & home, happy with her vote, but definitely not claiming civic responsibilities.

In ‘Movie-Struck Girls’ you learn all about these long-hidden details of American film history & it’s collision with turn of the century American values — including titles, studios, stars, organizations, & political figures. For a person who adore film & is a passionate feminist, this is a great read. Why it’s as thrilling as those old adventure serial films!

Stamp does a great job of presenting this long ignored part of film — and women’s — history. It’s definitely an academic read, which means it is meaty enough for those who want to further search for clues, artifacts & films themselves. It may not read like a novel, but it’s so fascinating & full of details, it won’t disappoint. Fans of film, especially silent films, cannot call themselves educated in the subject unless they know this history. And women, well, we start to see a much larger image emerge — our complaints regarding women in the media have much deeper roots than we previously knew.