If you’re following my Dare To Be A Feminist topic at Scoop.It (or have just been paying attention to the news), you probably noticed all the discussion about the Pew Research Report that states that women are earning more than their husbands in 40% of American families with children:

A record 40% of all households with children under the age of 18 include mothers who are either the sole or primary source of income for the family, according to a new Pew Research Center analysis of data from the U.S. Census Bureau. The share was just 11% in 1960.

These “breadwinner moms” are made up of two very different groups: 5.1 million (37%) are married mothers who have a higher income than their husbands, and 8.6 million (63%) are single mothers.1

The income gap between the two groups is quite large. The median total family income of married mothers who earn more than their husbands was nearly $80,000 in 2011, well above the national median of $57,100 for all families with children, and nearly four times the $23,000 median for families led by a single mother.2

If you, like many other people, just skimmed that headline, here’s what you need to really know about this discovery:

Compared with all mothers with children under age 18, married mothers who out-earn their husbands are slightly older, disproportionally white and college educated. Single mothers, by contrast, are younger, more likely to be black or Hispanic, and less likely to have a college degree.

The growth of both groups of mothers is tied to women’s increasing presence in the workplace. Women make up almost of half (47%) of the U.S. labor force today, and the employment rate of married mothers with children has increased from 37% in 1968 to 65% in 2011.3

(There’s also discussion of the dreaded single mothers; so I urge you to read the entire Pew findings.)

One should also note that this is not simply a matter of “feminism having won, so just let it all go away.” For the findings also reveal that “total family income is higher when the mother, not the father, is the primary breadwinner.” Thanks, pink collar ghetto, unequal pay, and continuing notions of gender inequality in the workplace. Not to mention all the BS traditional notions of motherhood.

Never mind the facts, however; let’s just get to the million dollar subtext question Liza Donnelly put forth regarding the 37% — the married mothers who have a higher income than their husbands: Can Husbands Handle Being Outearned By Their Wives?

The answer is, quite clearly, “No.”

Exhibit A: Lou Dobbs and his all-male panel of guests. Here, the comments range from Doug Schoen’s “a catastrophic issue” that “could undermine our social order” to Erick Erickson’s statement that this is the real “war on women.”

If you want to dismiss all this as the ramblings of irrelevant talking asshats on Fox (for which I will gently remind you that their rhetoric is often too dangerous to be dismissed), you’ll need to also know about this other study, called In Sickness and In Wealth, from Washington University in St Louis’ Olin Business School.

This research found that “men are more likely to experience problems with erectile dysfunction and other forms of mental and physical anguish as a result of his female counterpart being the primary breadwinner”.

Olin Business School professor Lamar Pierce and Michael S. Dahl of Aalborg University in Denmark write: ‘Male sexual desire and behavior is tied to cultural and social factors such as patriarchy and money, potentially causing men to suffer reduced sexual desire or dysfunction when perceiving their traditional role of provider to be usurped.

‘In fact, the medical literature has shown that anger and frustration can lead to serious sexual problems such as erectile dysfunction (ED), a problem also linked to unemployment and decreasing household income.’

Additionally, Pierce told NBC News: ‘There is a powerful social norm for many men that it’s important to make more than their wives and, essentially, when that social norm is violated, what this does is make them feel emasculated.’

And men do not usually suffer alone, as research found that the female breadwinner also has problems with insomnia and anxiety.

Men in such a relationship have also been found to be more likely to cheat in an effort to regain their bedroom mojo.

It seems we have not come a long way, baby, in terms of marital duties, especially not in terms of how men think. Shudder. Bigger shudder. Because this all sounds like a lot more permission slips are about to be handed out.

Of course, not all men are this primitive. But for some reason, primitive still prevails in the politics (and libidos) of our lives. 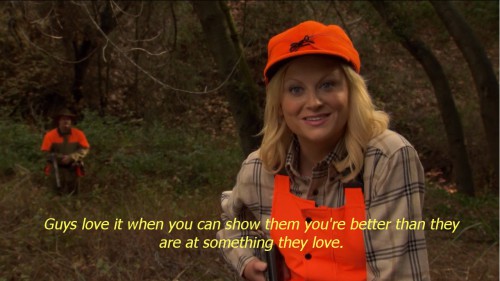