From How To Run A Successful Party: Party Ideas, Games, Fun, For Children & Grown Ups! by Elizabeth King, with the rules for proper dunking. The copyright, 1945, belongs to the Doughnut Corporation of America, so they out to have known. 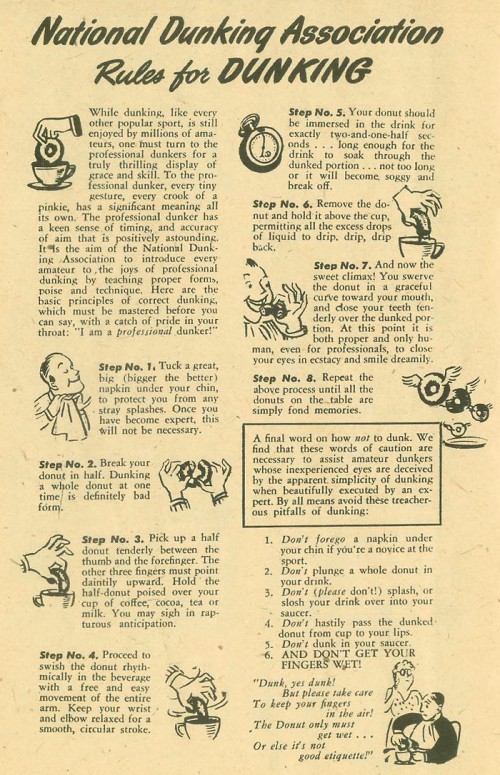 Get a (truck) load of the imprisoned women; beauties in bottles you should drink in, “Grads”. But that’s not all. Note the “Siouxing For Victory” pun. That’s a lot going on in a small photo.

Originally spotted at Ice Cold Collectibles Illinois on Facebook, a reprint of this vintage photo of the Grand Forks, North Dakota, Coca Cola Bottling Co. is from Outwest Photos 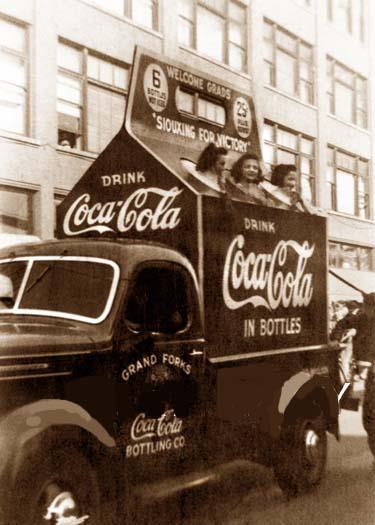 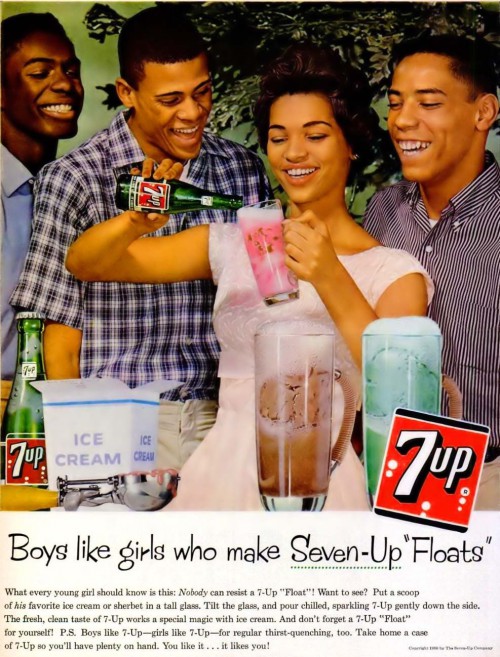 What every young girl should know is this: Nobody can resist a 7-Up “Float”! Want to see? Put a scoop of his favorite ice cream of sherbet in a tall glass. Tilt the glass, and pour chilled, sparking 7-Up gently down the side. The fresh, clean taste of 7-Up works a special magic with ice cream. And don’t forget a 7-Up “Float” for yourself! P.S. Boys like 7-Up — girls like 7-Up — for regular thirst-quenching, too. Take home a case of 7-Up so you’ll have plenty on hand. You like…it likes you!

Hey, look, it may be sexist, but it also tells girls how to avoid giving boys head — on their 7-Up “Floats” (forever in quotes) and later, their beers.

Copyright 1960 by the Seven-Up Company; via. 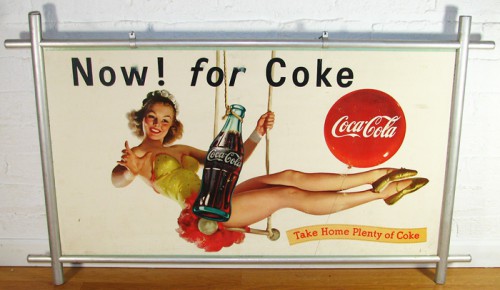 [V]intage original 1950s double sided Coca-Cola – Coke soda fountain sign with its original aluminum frame. This is an outstanding antique original example the artwork is of course by Gil Elvgren, a pretty circus pin up girl performer on a trapeze with text that reads “Now! For Coke – Take Plenty of Coke Home”.

“For Extra Fun Take More Than One” I think they meant the packs of Coke, not women… Of course, I could be wrong; you know how compelling men find a set of twins. Sublimely subliminal. Via. 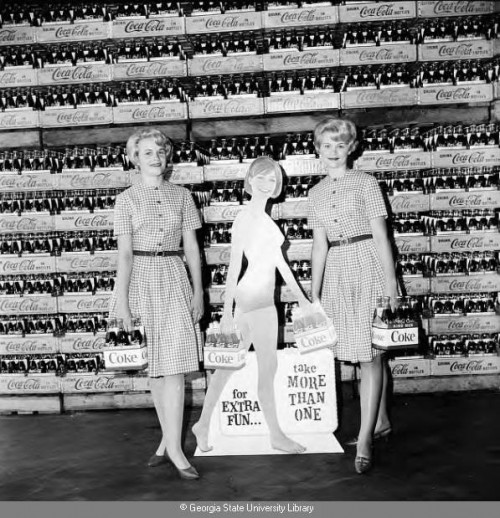 I’ve been saying, “Cool beans,” or its derivative, “Cool beaners,” for as long as I can remember.

I occasionally still use that expression, along with this vintage image, in my Big Mouth Promotions newsletters when I find something very, very cool.

: an ice cube tray that molds as it freezes liquids into coffee bean shaped ice cubes. 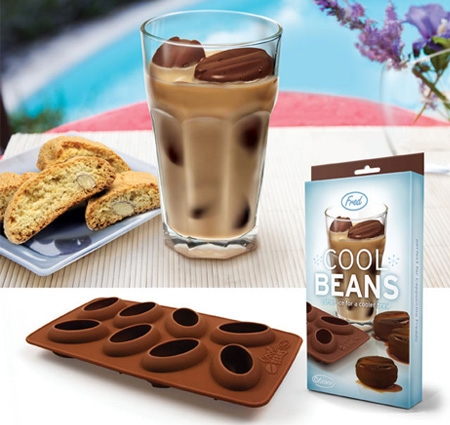 The maker says that this is most useful to those who like their cold coffee drinks; you freeze coffee into little bean shapes to keep your drink iced while adding flavor to your drinks. But most importantly (at least to this non-coffee drinker) is the fact that you can use this to make any kind of cool beans you’d like — from regular ice cubes to fruit purees, all in the adorable little bean shape!

I need this. And I need it by the winter time because the most ice I seem to use at home is to cool down my hot chocolate so I don’t have to wait too long to drink it. Having a frozen little chocolate bean (made from the previous batch of hot cocoa) would be just the thing!

OK, maybe so he’s not-so-much Mr. WalMart… But he is Derek — The Derek — of Derek’s Big Website of Wal-Mart Purchase Receipts. (Yeah, I married Internet Royalty — Old Guard Internet Royalty, not a dot.com bust-er, or a guy with some money to buy a presence.) Anyway, because of hubby’s history, I keep an eye out for amusing WalMart stories.

So who could resist an open letter to WalMart entitled, Hey, Wal-Mart, your new case-less milk jugs are retarded:

Congratulations on your latest successful accomplishment in the dairy retail industry. Assuming, that your goal when redesigning your plastic milk containers was to have me spill milk all over my kitchen counters.

You can let the letter’s author, Chase Roper, tell you all about the new product; all I know, is after reading what Roper wrote, there won’t be any new case-less jugs of milk on our WalMart receipts.

While I could just thank Roper for his consumer report, I really enjoy his classy retorts. Like his exit line: “Also, your stores all smell like maple syrup and old people.”

It was my hope that my doodling would improve a bit each week — but then Laura had to make a complicated theme this week. *sigh* So here you go. 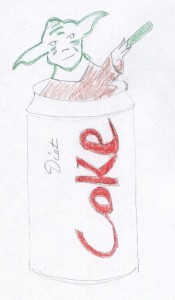 And now here you go — to doodle. Right?

Pepsi’s latest foray into social media with an iPhone app for its AMP energy drink is more than trending on Twitter — it’s downright pissing women (and men who give a damn) off.

The “fun” application is called “before you score” — and yes, with “score” means what you think it does: getting laid. As in men who “bag” chicks.

For all the gory details, check out Mashable’s post, “Alienate Your Female Customers? Pepsi Has An App For That” (the title of which is where the trending “alienate your female” topic comes from). But maybe all you need to know is the simple premise of the app, as stated by Mashable’s Adam Ostrow: “AMP has actually built features into its application that make it seem one can systematically “score” by exploiting women’s naivety. Beyond that, they actively encourage users to promote such conquests through social media.”

Whether or not the app can really assist in the exploitation of any woman is neither here nor there. And if Pepsi tries to defend itself with a “the app is just entertainment” it’s no excuse. The pure perpetuation of predatory male stereotypes and encouragement of such actions is horrible.

I would rant on & on about this, but there’s plenty of smart comments to read at Mashable (and at Jezebel too). But that won’t stop me from asking a question…

What’s next, Pepsi, a cave man app where you can slip a Mickey into a woman’s drink and drag her off by the hair? Oh yeah, and brag about it too.

At Encore Ephemera, a 1960’s ad for Canada Dry beverages (Ginger Ale, Club Soda & Quinine Water) which “makes pun” of prohibition even while it suggests adding vodka — I guess that’s why Canada Dry was “behind the best bars.” 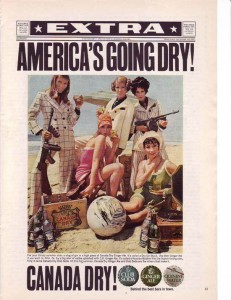 I’m a Diet Coke girl, myself; so when I saw Lawrence Yang’s response to Pepsi’s logo, I really, really enjoyed it. *wink*