This is a relatively-new blog so I have not yet had the time to get into Everything, but if there’s one thing that irks me (and let’s face it, we know there are sooo many things that do bother me), it’s men complaining about how bad they have it.

Poor poor men with their hugely disproportionate power base. Poor poor men who — despite a 100+ year old suffrage and other assorted women’s movements — still retain a huge majority of the economic, legal and brute force (via armies etc.) power in the world. Poor poor men who can’t deal with (amazingly small) micro-changes in gender roles. Wha wha, my heart so does not bleed for you.

Not that we women hate me; many of us who complain the loudest have men for fathers & grandfathers, are married-to and happily live-with men — some of us even lovingly raise male children. Who knew?!

But every time we point out the disparity, the inequality, and yes, the personally & publicly horrifying things that men do, we are man-haters. It can’t possibly be that we are offended & disappointed by the male refusal to accept the responsibility which comes with power; we must simply hate them.

And if you dare to point out just how stupid that thinking is, you are only more of a man-hater. :sigh: 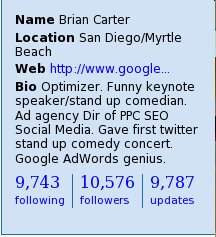 Briancarter, self-described SEO optimizer and “funny keynote speaker/stand up comedian” (it will become crystal clear in a few minutes why the funny-man makes a living being the opposite of funny), asks: Is there an antonym for misogynist? And to be perfectly clear, he is searching for “a hater of men” — and, yes, lesbian jokes will be made ha ha ha — let’s laugh at the lesbian-man-hating stereotype.

Two minutes later he tweets: lol classic! I asked is there an antonym to misogynist, RT @zainyk: @briancarter The View.

He replies: @shellerae nice, but no one ever uses misandrist…?

And then it disintegrates into more mocking of The View and women while Brian ignores more insight from shellerae, who tweets both “I love men {shrug} so would be hard for me to use & would avoid people who described themselves as such!” and “I think there are people who don’t hate the “gender” but more don’t respect it.”

And then we get to the meat of the matter when Brain says, “ya I was thinking: there are women who hate men, so why don’t we hear a word for that as often as we hear misogynist?”

Maybe it’s because man-hating is — if not a complete myth — then far, far less prevalent than the hatred of women. Duh.

As Astrogirl426 says: And anyway, there is a word for man-haters (of either sex): misandrope. Perhaps there just arent as many of us– I mean them ;)

It seems that the conversation ended with Brian’s lame tweet: lol no I think you took it way too personally- a lot of people answered that way… sorry :-)

Sorry? Sorry?! That’s all you have to say?

You start a conversation, one that adds to larger public discourse, which reduces valid female complaints of factual disparity to the simplistic, nonsensical, and dismissive “women hate men” — and then, between making and encouraging lame negative stereotypical jokes and ignoring sane comments, when you learn that you offend people, and all you can do is blame them for taking it “way too personally” — ending with a “sorry” which reads more like you are sorry for what they did or said than taking responsibility for your own actions?!