This week’s Monday Movie Meme is Deep Impact: Movies That Have Changed Your Life:

Our blogging buddy Cardiogirl wanted to know if we had ever covered movies that changed our lives or our world view.

Fundamentally, I don’t believe movies — or any media, for that matter — makes people do anything. I don’t think films have changed my life. Or yours. Enhanced your life, sure; if you’re lucky (and smart), movies have provoked thought; but primarily, because people mostly choose what they watch and therefore their selections are based on notions previously held, films confirm what you & I already know or believe.

Seeing that in pixel-ized print makes me rethink why I bother writing then… Rather depressing. So I take another look at the challenge. “What movies had such an impact that they caused a change in our behavior, beliefs, or exposed us to a new passion?”

Ah, that last one — that’s the ticket! Movies and media can expose us to new passions. They can, if we are open to learning, educate us and inspire us to find out more about something we were ignorant of before — and that may include facts or plights presented in such a way that they open our eyes to a new position or point of view.

In that sense, Debra Chasnoff‘s documentary, Deadly Deception: General Electric, Nuclear Weapons, and Our Environment, opened my eyes and I changed my behaviors; to this day, I won’t buy anything made by GE. Not even a light bulb.

And if I’m forced to buy a GE product because it’s the only option on the shelf, I rant about babies born without skulls.

And then there was Mississippi Burning. That film had a profound impact on me spiritually. (Please note that this is not a review of the film, nor a commentary on it’s historical accuracy or depictions of reality; just about my personal epiphany.)

Prior to renting the film (shortly after it’s home video release) I had known of the events it was based on, namely the real-life murders of three civil rights workers Michael Schwerner, Andrew Goodman and James Chaney; as I said, we are drawn mainly to those things we know &/or already believe in, so I was drawn to a film about civil rights, equality, and humanity (and its converse). But after inserting the tape, once seeing the date on the screen, “June 21, 1964,” in white letters on a black screen, I was shocked. That date was news to me.

I know I didn’t know that exact date because I would have remembered it; it’s my birthday. 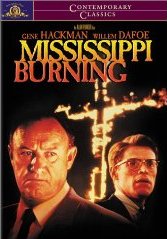 The fact that I was being born while those men were murdered shocked me; the next few minutes of the movie blurred (don’t worry, I rewound it and starting the film over) as I checked in with my spirit, my soul… And then, in a moment of crystal clarity, I knew.

I knew that my profound pain and connection with civil rights issues wasn’t just because I was a nice person or something. It was more than that.. Deeper. It was due to the fact that I could not join my house of flesh on this plane while those souls suffered their way out of it and not be touched by it.

You can call me crazy for such thinking; many do. And you’d be correct to hold me accountable for such thoughts, not those who made the film. Because I still argue that these films didn’t change me; I changed me.

Yes, the facts opened my eyes — because my mind was open to being informed — and I took action (or belief) because my values (and sensitivities) dictate I must. And so I have to take as much — or more — responsibility for my actions than I’m willing to give to media creators for their efforts.

If all of this seems contradictory, or like I’m splitting hairs, it’s because I think we need to draw these lines for ourselves.

I am thankful my college professor showed us Deadly Deception; and I feel blessed to have learned a fact that somehow clarifies spiritual holdings in Mississippi Burning. I admire all involved in those projects greatly (and those sentiments are equal to the feelings of mourning sickness both projects inspire). But if I hand over the responsibility for my actions to anyone, I run big risks. So do you.

We run the risk of expecting people to plop things in front of us, rather than owning our responsibility to be seekers.

We run the risk of relaxing our personal accountability for our own actions, placing blame & credit alike on others for what we ourselves do or fail to do.

So splitting these hairs isn’t cosmetic or even a matter of semantics; it’s about ownership of our actions, beliefs, and passions. This distinction between ‘media which moves us’ and the actions we opt to make is incredibly important.

‘They’ can bombard & pressure us all they’d like, to buy shoes, kill people, vote for candidate A, believe the religious rhetoric of god B, drink beer, mutilate ourselves in efforts to be ‘beautiful’; but we make the choices. We must accept our personal accountability for those choices.

We consume media, and we are what we eat; but in this case, we need to know that we digest in order to properly digest it. And to digest it, we must be diligent in our seeking and consumption of media; as equally open to ideas and points of view that counter our own as we are critically thinking about what we see/hear/read.

Great films, or crappy ones, great books or crappy video games, do not make us do things. We do.