This holiday weekend, in honor of Memorial Day, I’ve seen this poster circulating quite a bit… 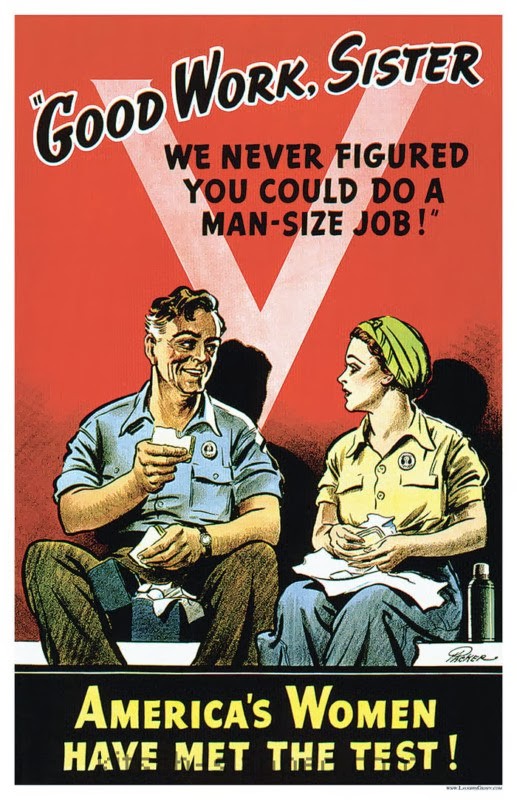 But there are some things you should know. (Yes, feminists often don’t have the luxury of taking the holidays off.)

Info on this vintage WWII poster:

“Good work, sister.  We never figured you could do a man-size job!”

America’s women have met the test!

What a lovely backhanded compliment this whole poster is.

The whole gender dynamic is astounding…

…The man being shown as larger to impress upon us both the size of the job and the ‘little lady’ is a bit of visual overkill. (But, hell, shouldn’t that USDA prime cut of red-blooded American beefcake have been drafted?)

Fundamentally, it seems this poster was designed to assuage male discomfort at the notion of “Rosie the Riveter” women working outside the home rather than actually thank women for their work.

During WWII, almost 400,000 women served in the US armed forces — including 6,500 Black women who faced even larger racism hurdles to do so. Those are pretty big tests too, poster.

However, despite any of their wishes, women could not serve in combat. Because “menstruation & bears!” or something.

But still, even without combat duty, many women — over 400 of them — lost their lives serving their country in the armed forces. In addition to the fathers, husbands, brothers, and sons we lost, we also lost mothers, wives, sisters, and daughters. More were wounded. Women sacrificed mightily. And not just the danger of “those spreading hips that may come from long hours of sitting” too. They gave their lives and limbs, just as men did; only the women suffered more in secret. Just as they do today. Just as they always have during war: See This.

Whether women & girls worked in factories or shipyards, in the armed forces, in their yards planting victory gardens, in their homes — wherever they worked — they served this country. To the best of their ability — and as much as they were allowed.

This holiday, remember everyone who gave for this country.

Normally, we see the pin-up version of women working in WWII. Like this image of dancers at London’s Windmill Theatre practicing their routine while wearing gas masks and hard-hats with their costumes. (January, 1940.) Or we find articles focusing more on the figures of women, in service or not. 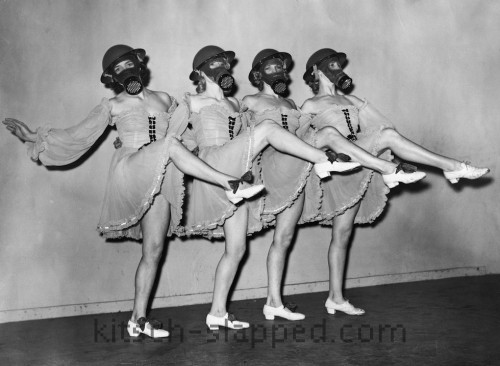 But hard hats were more than de rigueur for cute images of women on the homefront during those war years. In fact, there were many promotional campaigns advising women on how to dress for their new world of physical labor and factory work. This one didn’t emphasize hard hats; but clearly the focus is safely, not being fashionable. 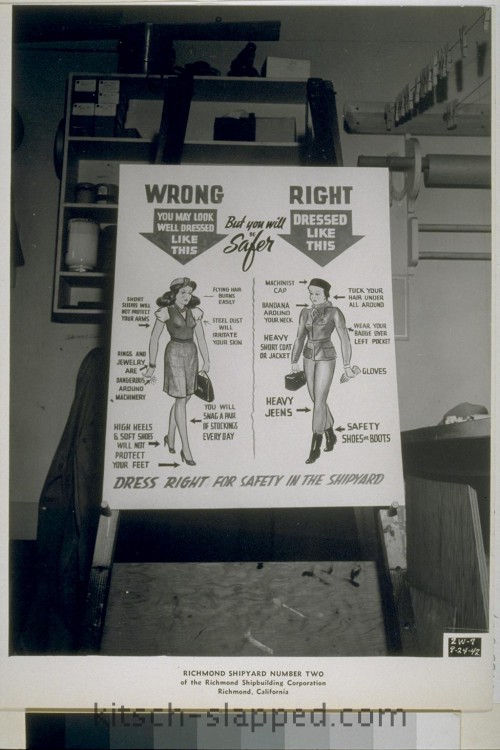 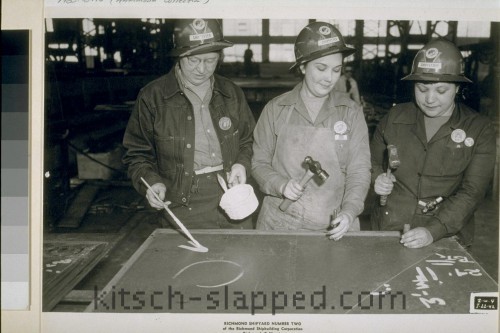 Here’s another bit of history:

Mrs. Arlene Corbin (right), time checker in a Richmond, California shipyard brings two-and-a-half-year-old Arlene to a nursery school every morning before going home to sleep. Mrs. Corbin works on the midnight to 7:30 a.m. shift and relies upon the school to keep her daughter busy and happy during the day. 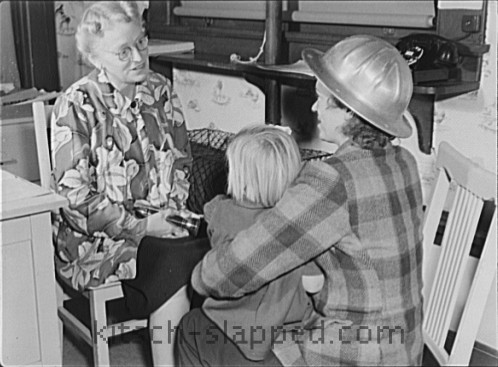 If you collect actual historical objects of women from WWII, check out this vintage wartime fiberglass safety hat 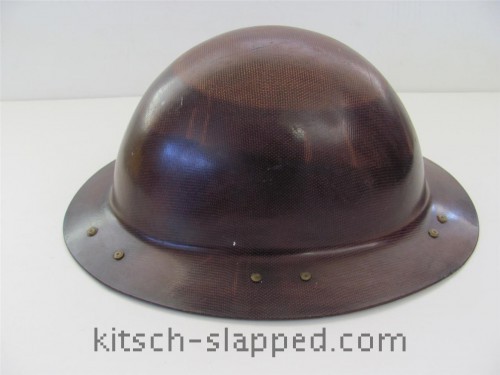 The hardhat belonged to a female employee who worked for Kaiser Steel in Fontana, CA during 1942-45. It may be more difficult to appear beautiful in a hardhat (even Rosie the Riveter’s bandana is pretty rockin’), but hard hats were the realities in hard times like war. And hats like this are a part of women’s history that shouldn’t be shunned for the pretty pinup version.

Proof that this look was in fashion for women before there was an American home front and a The War Advertising Council’s Women in War Jobs campaign with Rosie the Riveter. 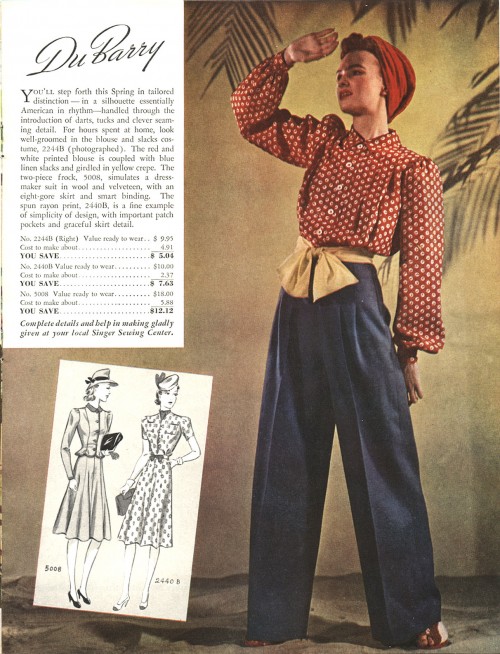 Scanned from New Fashions For You & Your Home, Spring Summer 1940, published by Singer Sewing Machine Company (I’ve listed it at eBay), this page features patterns by Du Barry

More scans from this vintage publication at my Tumblr.