Check out the October issue of Psychology Today; it’s full of great dating information (even if it’s not all listed as such). For example, the cover art & headline “What Signals Are You Sending?” which goes with a feature by Sam Gosling, entitled Mixed Signals. 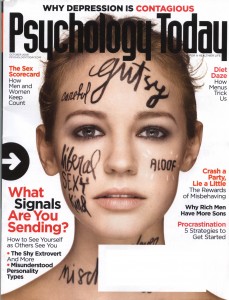 In the article, Gosling discusses our personal blind spots to the perceptions that others have of us and how we overestimate not just how we are seen in terms of flattering ourselves, but we overestimate the ability others have to be aware of our internal states & feelings — we overestimate the “extent to which our behavior and and appearance are noticed and evaluated by others — a bias known as the ‘spotlight effect.'”

In many cases, our opinion of ourselves and the perception of others clash — but that’s not even necessarily the worst part; you might not even be aware of it.

You need feedback (direct & indirect) from others to know what they think of you, and sometimes the very things you need to know the most, negative perceptions, are least likely to be communicated.

If you do know how irritating or attractive you are, it’s probably via direct or indirect feedback from others. At work you might find that, despite setting everyone straight on a few issues when you last served on a committee, you haven’t been asked to serve on any since then. If the attributes are positive — such as the fact that everyone likes you or that you’re very attractive — people are more likely to come straight out and tell you about them. If they’re negative, they may forever remain unknown to you.

If you’re tempted to ignore the perceptions of others, don’t! Your body language is outside your own visual field, but others are very aware of them. And your behaviors are, if not similarly unseen by you, understood by you because you (and often only you) know your motivation & reasoning. So others do have clues for their perceptions and attitudes about you.

Even if you think other people are misguided, their perceptions of your character probably do reflect things you do habitually. Once striking set of studies recently showed that a spouse’s ratings of a person’s anxiety, anger, dominance, and solitariness are better than self-ratings at predicting heard disease. The implication: Our spouses are better judges of such traits than we are.

(I think it’s obviously worth noting the traits listed here; that spouses are better better judges of anger & dominance than the person who is angry & dominant. This refers back to the victim’s need to survive and brings up the point that those in an abused person’s support network — from friends & family to doctors, police, social workers & legal professionals — had better trust them when they say his behavior is dominant, threatening, etc.)

When people are asked how long they think their romantic relationship will last, they’re not very good at estimating the right answer. Their friends, it turns out, fare far better. But if you ask people how satisfied they are in a relationship, their ratings accurately predict how long they’ll stay together. In many cases, we have the necessarily information to understand things are they are — but our blind spots don’t allow us to take it into account.

(Yet another reason to really discuss relationships from many angles, including how happy a person is as part of a couple. Doubly important to do so alone when you fear your friend is being abused, so that they can move past the cover story and predictable prediction points of “we’ll be together forever” — which could very well be a taught or fearful response.)

This doesn’t always mean others are right, of course. Sometimes the blind spots are, again, due to the perceptions of others — based on things they observe which do not reflect what’s going on internally with you. This would seem to be especially important at work and when dating, when dealing with people who do not know you very well yet. Since their perceptions will affect how you are treated (no committees, no promotions; no dates or second dates, etc.) it’s important to see what signals you are sending.

Many of us have times when we are misunderstood. People perceive us as cold and unfriendly when we are really just feeling shy, as flirtatious when we’re just trying to be friendly, or as depressed when we’re just tired. Being misunderstood is largely a problem of a lack of information – not communicating effectively with the people around you through your words and body language.

Gosling cites work by Randall Colvin of Northeastern University which indicates that people who are easily judged, those that people just “get,” tend to be extroverted, warm, consistent, and emotionally stable. These traits, called “amplifiers,” tend to increase the expression of other traits as well as the amount of verbal & behavioral information, making them easier to read.

Another trait that makes people easier to “get,” is “blirtatiousness.” Blurters, those who tend to respond to others quickly & effusively, are open books.

Gosling says that if & when you feel misunderstood, you should say & do more. “Even introverts can train themselves to communicate more through their words — telling people directly what they like and how they feel.”

But before you run out there and babble profusely about how you feel, you should know how others perceive you. And the best way to do this is to ask for feedback. And Gosling wants you to ask more than just your mom. *wink* Seek feedback from many others, including at work and, if possible, your enemies. Gosling also recommends using “the cloak of anonymity” that is the internet; suggesting apps like Facebook’s “Honesty Box” or the “YouJustGetMe” app he collaborated in developing.

I suggest you start by considering the obvious. Are you asked to be on committees, invited to parties & events? Are you disappointed that despite all your efforts, you’re still not offered promotions & dates? If you feel you are being passed over or underestimated, then sit down with your friends for some honest talk. Maybe open a bottle of wine first; cuz once that starts flowing, so will the honesty.

The next morning, evaluate what was said and put it in context of who said it and how you perceive them… What can you learn from all of that? And how can you counteract any misperceptions with better communication?