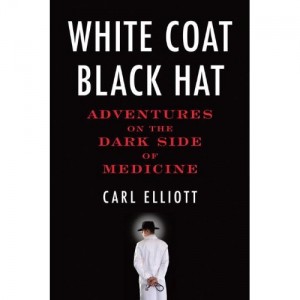 For those of you who question my concerns regarding ethics in medical studies — most heatedly debated in my discussion regarding the “science” of “deadly corsets” (the heat there surprised me greatly; I expected it regarding the flack to come regarding feminist use of the corset), I urge you to read Susan Perry’s Too many clinical trials still exploit the poor and other vulnerable people, says U of M bioethics professor:

Are there enough protections in place?

No, says Dr. Carl Elliott, a professor of bioethics at the University of Minnesota and author of the just-published “White Coat, Black Hat: Adventures on the Dark Side of Medicine.” (Last month, Elliott also published a Mother Jones article that focused on the 2004 suicide of a young mentally ill man who was enrolled at the time in a U of M industry-funded clinical trial of the antipsychotic drug Seroquel.)

Clinical trials can still exploit study subjects, only the exploitation has taken a different form, Elliott told me in a phone interview earlier this week. Medical researchers may no longer be going out and intentionally making people sick, as they did in the Guatemala study (and in the infamous Tuskegee syphilis study), but they still can — and do — recruit vulnerable people (the uninsured, the poor) and often fail to give them adequate treatment while the subjects are in the trial.

“In a lot of ways, what’s going on now is even worse,” said Elliott.

You know I’m getting this book.

I’m putting it on my wish list right after I puke; it’s not so satisfying being right when the issue is so horribly wrong.