I once was an Oprah fan. I even went to a taping of her show once with a group of friends, one of whom had a cousin on the staff, so we saw a bit more than perhaps the regular guests do/did. I was then impressed with her not-on-camera persona, chit-chat with coworkers (when I’m certain she didn’t know we could hear her) and her professional and kind decision not to air that actual episode because one of the young girls broke down and became too upset to remain on stage. But my affections for Oprah, as well as some respect, left when I experienced domestic violence and, like other survivors such as Alessia, who has written about this herself, discovered how willfully ignorant Oprah wishes to remain on the real issues of domestic violence.

But I should try not to get off task.

A few days ago, Oprah announced that her television network, OWN, would not be renewing Rosie O’Donnell‘s show. This made me feel sad. I don’t know Rosie, personally, but I’ve always enjoyed her shows. Even if I didn’t watch more than three episodes of this latest TV show of hers (put a pin in this; more on it in a bit), it felt nice knowing Rosie was on the air. But my sadness turned to anger when I heard the comments about Rosie and OWN struggling too. Not just the ones made by the namesake of Trump’s Syndrome; that trash talk is expected. No, I was more offended by statements like, “Oprah fires Rosie: Seems another liberal network is failing. Gotta be racism or bigotry against fat women,or fat lesbo’s or something.” (A screenshot here, just in case said thread disappears; and to document the “supportive” comments in agreement.) 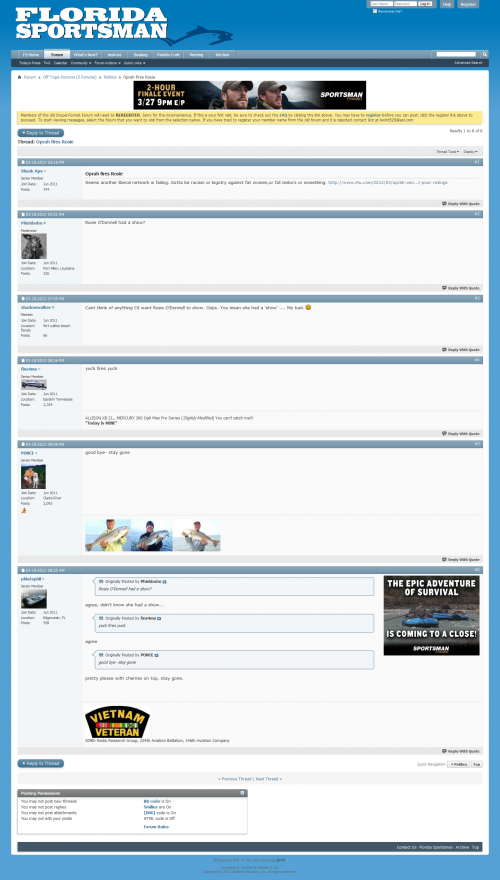 Now, you ask, how can I complain about such attacks when I took a shot at Donald Trump myself? I sure can dish it out, but I can’t take it, right?

The Donald’s hair is something which could be managed, should be managed, but the man apparently loves it as much as the attention it gets him. And while I have poked fun at his appearance (and that of his ill-fated children), I didn’t use that dislike of his physicality to deride the man’s character, his ability to be successful, or devalue him as a person. (I really don’t have to do that; in my opinion, Trump does most of that himself every time he opens his mouth in front of the media — and he pushes his way to microphones a lot.) The man is not his bad hair; his bad hair does not equal his worth in terms of money or his value to society. This is normally how it goes for men. Excluding gay men, of course; they, whether they like it or not, are treated like women because they aren’t considered to be “real men”.

In addition to our labels of female &/or gay (quite often said with sneers if not using out-right slurs), we women, gays, lesbians, trans and bi folk are all judged on appearances. It’s more than just some male-gaze objectification reducing us to sex parts. We are our weight, our hair, our appearance and our non-male status — and those things are the reason why we are failures, things of little worth or value.

Now back to those things we put a pin in, beginning with my “Trump’s Syndrome” comment.

Yes, that statement at GetGlue is proof that I watch Celebrity Apprentice — even as I’ve admitted to not having watched much of Rosie’s. How might I reconcile that, at least to myself? Well this is where we pinned that first point.

While I do tell myself that Celebrity Apprentice is an exercise in studying human nature with the benefits to charity, it’s really a guilty pleasure — one that benefits from being a major network show; I am reminded often to see it while watching other shows on that channel. It’s not just that I’m some mindless sheep “the media” controls, but the fact is there are benefits to being part of a major network’s programming. For example, there are times when I “watch” a show because I’m busy researching or writing and not concerned enough to change the station, times when I just continue watching a channel because I like what comes on next and I don’t want to miss it, etc. These realities are the fundamental problems Rosie had with her show and why the whole OWN network is struggling.

There’s just not enough good programming on OWN. And I’m not the only one saying so. Here’s a screenshot of OWN’s main page with comments such as these:

archtop1
Posted: Thu 3/22/2012 10:14 PM
Like many others, I am so sorry to see the Rosie Show go. It was almost the only show I watched on OWN. I can’t believe the shows that Oprah has chosen to be on her network. This was supposed to be a channel that would lift us up, but it has shows like unfaithful. It was supposed to be fresh but it has endless reruns of Dr. Phil.
I have loved Oprah tor so long and I wanted her channel to succeed, but I’m so disappointed!
O, where are you?

balinda135
Posted: Thu 3/22/2012 9:44 PM
I’m a big fan of Oprah, and certainly want OWN to succeed, but there is almost nothing I want to watch on OWN at this time. It seems odd that Oprah, who is all about living your best life, has so many shows on her network about people in prison, people cheating on their spouses, murder, etc. None of that appeals to me. And to be quite honest, the Master Class series puts me to sleep, and Oprah’s new show where she goes and interviews people like Steven Tyler are a yawn as well. I think she needs a break from interviewing. Last year my favorite show was the “Behind the Scenes of the 25th season of the Oprah Show”, and I loved the Shania Twain series and Addicted to Food. Also the special Julia Roberts did where she interviewed interesting women. I attended the O Magazine conference in Atlanta in October and that was fantastic – inspirational and motivating. I know these are two completely different formats, but I don’t feel OWN is delivering the types of programs that appeal to your former viewers and magazine subscribers. Give us some Ali Wentworth, or Maria Shriver doing profiles on interesting women, like her interview in the magazine with the female poet. And mix in some new talent as well – not just your tried and true circle. You can do it, Oprah!

[I had no idea about some of those shows — sorry I missed a few of those. But then, since I’m not watching OWN, how would I know or remember?]

When I first heard Oprah Winfrey was going to start her own network, I may not have been the most excited person on the planet… But I was hopeful that it would have good shows. It’s own good shows. Negative comments on what it does air aside, the network lacks dynamic shows. I don’t mean the faux action and tension of “reality shows,” but good solid shows women want to watch about issues that matter. And Oprah needs to move past who she was in terms of her old show and those coaching shows like Lifeclass and Master Class — it feels more condescending than inspiring. Especially when sprinkled between such other “ick” pandering programming.Frankly, Oprah, your network’s shows run dangerously close to treating your stated target market like their physical and psychological attributes and “female” status — when you’re not feeding us crime shows or reruns of stuff we feel we could see anywhere, anytime. And that’s uber disappointing from a woman. Even if I’m not your number one fan, I want you to succeed, Oprah!

Listen, Oprah, a lot of your audience is older — we’ve been-there-done-that with you already. And younger women? Hell, thanks to you, Ms. Winfrey, they’re past what used to be too. It’s not (just) the Internet and new media that challenges you here for audience attention; it’s the old thinking.

If there’s one thing that the Internet should be teaching everyone in media today, it’s that, like the origins of newspapers, the productions of original thought — even if opinionated and “slanted” but with the integrity to disclose itself as such — gain followers. Why not focus on the one thing a woman’s network should never shy away from: Feminism. I don’t think I have to tell you that I’m not talking about Rush Limbaugh’s idea of feminism; but what’s wrong with taking a stand for the equality of women and giving us intelligent programing rather than approaching us like we all need the tv equivalent of chocolate for our periods? (Lifetime annoyingly already covers that.)

Go get Joy Behar; her show was aces but suffered between mindless HLM fear-mongering-hype drones. (Oh, the agony I endured just to make sure I wouldn’t miss my Behar!)

Give Roseanne Barr another talk show; her’s was one of the best ever but ill-suited to daytime when so many of us worked then. (I still wish I had that Mary Daly interview on VHS — why did I tape over that??!).

And then reinstate Rosie O’Donnell, let her have the show we need from her, and you’ll have a trifecta!

(Dare I dream you get Rachel Maddow and I might give up MSNBC completely in favor of OWN!)

As for what you do with the other hours of the day, well, I’ve got long lists. Have your people contact me. I don’t have people. …Well, I have family, but please don’t leave messages with them. Just email me direct at Deanna.pop.tart@gmail.com and I promise I’ll reply asap.