The ladies of The View were not immune to the irony of having a show about infertility one day after the show with Nadya Suleman aka the Octomom. In their Hot Topics discussion (always my favorite part of the show), Whoopi noted it and there was brief discussion on why Suleman arouses so much heated debate. 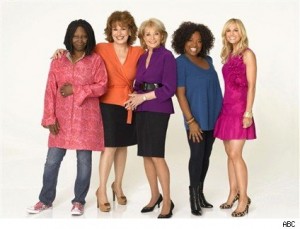 At first I was surprised when Hasselbeck defended Suleman — I expected her to be a hard-line republican on the welfare business at the expense of fetal life, even though that fetal life was a medical “opt in” not a manual one — and by a single mother yet. And I was more than a bit surprised by Whoopi as well. I wasn’t surprised at her talk of responsibility in having so many kid so much as what was missing from the conversation.

See, what bothers me the most about all the Octomom haters is the lack of compassion and tolerance. Not just for the buckets of crazy that motivate having so many children, but for outrage expressed at her while folks like the Duggars (of 101 Christian Pups & Counting) continue to skate — even past Jon & Kate Plus 8 before the marital drama. I vented about all this before, but here it is again:

Before watching the Dateline interview of Nadya Suleman, my only interest in this story was the passing thought of, “Will this family replace Jon & Kate Plus 8??” I honestly had no idea of the squawking & hostility towards this mother of six who just gave birth to octuplets. In fact, I was surprised to hear of it — and that’s what drew me towards the show.

(Personally, I’d like to lay a large part of this concerned indignation from our nation on the bitterly infertile; but even the fertile seem to be pissed off. So it’s larger than that… Hit a larger American nerve.)

What I saw was an articulate young woman who managed to keep her own anger at bay, who seemed understanding and forgiving of people who do not accept her decision, and was composed yet passionate as she tactfully mentioned her beliefs about the sanctity of life. But it was her earliest statements, regarding other large families, which seemed to lie at the root of all of the hullabaloo.

When two parent families give birth to &/or adopt other children, people seem to respect them. We’re fascinated, yes; we’ve got television shows, both series and ‘specials’, dedicated to such large & extraordinary families. But we treat them with respect in those shows.

However, few seem to respect this woman. As they said on Chelsea Lately, single, unemployed moms who aren’t entrenched in their community church aren’t cute. Funny? Sure. But too true; and that’s what’s not funny. As were the comments Chelsea Handler made tonight (Tuesday, February 10th) about a new mom having a French tip manicure — seeing those nails near such paper-fragile premature baby skin made me whine and wince. And yes, there are some questions about where the money for manicures and whatever is going on with mom’s new lips… But would these statements be made with such heat about other new moms?

Would we trust the judgment of children? When her older children are questioned on Dateline, they mention ‘squishy’ (aka crowded living space) and crying babies. Those may be true things, and even un-coached or non-parroted statements they heard from adults; but are children known for their unselfishness? Not all children welcome additional siblings period. Does that mean parents or persons considering becoming parents take the advice or sentiments of their children to heart and not increase their family’s size because their children complained?

I’m not saying I think Ms. Suleman has all answers or answers that I’d like to hear when it comes to caring for her children; but then, see, that’s the point: This is not my family, these are not my questions to answer, I am not the judge. I’m not a Christian, but I think that’s supposed to be the Christian way; to leave the judging to God.

This is not to say that I, or anyone, shouldn’t care about the welfare of this family, these 14 children — but then most of the people worried are freaking out about the word ‘welfare’ so maybe I shouldn’t use that word…

We currently have no test or licensing practices for parenthood; even adoption has few rules if one has enough money. And don’t let money fool you either; money doesn’t free any family from neglect and abuse — which is what most everyone is talking about in defense of their questioning this woman’s right to a large family.

But it seems to me, too much emphasis is this woman’s single status. It seems to be the bottom line of all the upset reminding me of the old fuss about Murhpy Brown having a baby; a big moral debate about choosing to be a single mom.

Have a two-parent family who keeps popping out children because they don’t believe in birth control, and few take them to task for their lack of common sense, even when they live on the government dole, or in a house that is ‘squishy’. Extra points if they evoke God a lot. And when they have specific religious or church affiliations, no one dares to really berate them because they have religious protections & a coven of church brothers and sisters.

You want examples? Fine. Those annoying Duggars (of 17 and Counting) take their kids to a “wild life refuge” and allow/encourage their kids to feed animals pasty white bread from their mouths, run & chase animals despite the “do not chase the animals” signs — and when asked, bozo dad Duggar says he wasn’t worried about his kids. Apparently God will protect his kids from his own stupidity. Plus they do all sorts of impractical and stunting things to their kids in the name of religion — so we aren’t supposed to judge. Even my beloved Kate of Jon & Kate Plus 8 totes & promotes her faith.

Most egregiously of all, the Murphy family, headed by John and Jeanette Murphy, who, already the parents of four, opened up their home — aka privately adopted — 23 children with Down Syndrome and were the subject of Our 27 Kids. If you want to talk about what’s fair to the children you already have, where’s the outrage that they placed upon their young biological children (two who existed before they began adopting, and two born after) the burdens of special needs siblings? It’s not just the daily grind either — it’s for the lifetime of those children they’ve adopted. As a mom who has had to deal with the safety of one child’s future — aka legal guardianship — in light of other children’s needs, I can’t imagine saddling children with 23 such responsibilities.

But we don’t talk about these issues. Or their economic dole. The Murphy’s admit they too take food stamps, like Ms. Suleman; Jon & Kate likely don’t need them due to their TV deal, their church, etc.; and I bet the Duggars took food stamps & more — at least before the TV deal — and their children, ill-prepared for the real world, are destined to return to such public assistance in the future. But we don’t talk about them because these are two parent families who evoke the name of God & their idea of His vision of morality when speaking of their large families. In the case of the Gosselins & the Murphys, their marital status is a tacit approval of God for most of the gossip-mongering public so ready to judge Suleman.

I guess Suleman should get all kooky with an old time religion and marry a man; preferably the man who biologically fathered her kids — the man her mother claims offered to married her. Then would everyone just shut up about her — or at least just talk about the blessings and realities of raising so many tiny babies? Judging isn’t going to diaper and feed those eight babies. Or her six other children. Nor is is going to help a new mom with her stress. It’s just empty finger pointing.

Well, it’s not completely empty finger pointing… Every finger pointed at Suleman has three more fingers pointed back the the finger pointer. And maybe those people should start there, looking at what makes them so judgmental.

Whew. I’m glad to have that all off my chest. Again.

But back to The View.

(Not that this whole discussion wasn’t about The View; it was. Like I said, Hot Topics is my favorite part of the show, primarily because it’s just like how women talk. But it’s time to leave the Octomom alone and move along.) 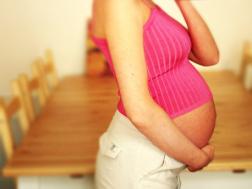 Yesterday’s episode was a “special episode” about infertility. While I am not without my sympathies for this issue (something my sister and most of her friends have had to deal with), I am waiting for today– Friday’s — Hot Topic fallout regarding the segment with Bill and Giuliana Rancic. (I know it will be there — especially as Joy mentioned it on her HLN show this evening.)

The short version, for those too lazy to click the above link and watch, it that Giuliana stated that her doctor advised her to gain 5 to 10 pounds to assist conception — and Giuliana resisted.

Now I get that her career is to be a thin woman-child waif on the red carpet etc., and that such a gig requires her to be thin, plus lose an extra 10 for the camera. But her reluctance seemed to have exposed a resentment that she should have to do such a thing in order to have a baby — as opposed to the more sane response that her career ideal weight would be so low that it would interfere with her basic biology.

Giuliana and Bill are both to be admired for sharing their intimate problems for, as they state, the ability to remove the taboo from fertility issues. So I don’t want to sound too harsh or kick folks when they are already down. But…

Giuliana’s statements regarding her earlier career-formed impressions that as a 20-something watching 40-somethings having babies had led her astray, given her the wrong impression about how much time she and her biological clock really had. So perhaps it’s time for Giuliana to see that she too is sending unfortunate messages to women.

By resisting those baby-needed 10 pounds, by emotionally fearing the horrid industry standard of “fat” rather than be horrified by just what those standards do to her and other women who aim to be so slim, she is not only receiving the wrong message, but sending it too.

She would do herself and those who view and idolize her better by accepting the literal baby fat and making a stink about the fictitious and unhealthy standards.

As a Brand Ambassador for The View, I am a participant in a Mom Central campaign for ABC Daytime and will receive a tote bag or other The View branded items to facilitate my review; as you can tell from my long-winded posts about The View, the tote or whatever I may get is not my priority, but I mention it to be ethical.